Jim-Bob Shmoopla is speeding along in his Indycar. He's wanted to win this particular race since his older sister, Jillly-Lou, won it five years prior. Not only does he want to win, he wants to beat her highest speed of 240 miles per hour for a single lap during the qualifier. He also wants to reach an instantaneous speed of 250 mph, way better than Jilly ever did. He knows it's impossible for himself to maintain a speed of 250 mph for more than a moment, but he wants to have bragging rights nonetheless. Not to mention the twist soft-serve cone she promised him if he could achieve both. Lucky for Jimmy-B, he can use his speedometer to figure this out. Even luckier, his speedometer knows the basics of calculus. 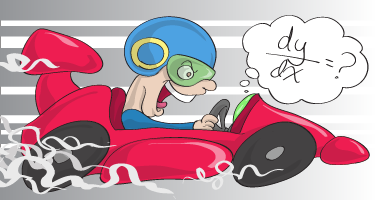 Speed is an example of a derivative. In fact, it's the slope of the distance vs. time plot. Without calculus, Jim-Bob could possibly tell if he beat his sister's single lap time. He knows the distance of a lap, and a stopwatch is easy to come by. However, it would be hard (or impossible) to tell if he ever reached an instantaneous speed of 250 mph without calculus.

As Jim-Bob heads for the home stretch, he and his crew are thrilled to see the pin brush the 250 mph mark. Victory is in his reach; he can taste the creamy goodness already. He crosses the finish line and meets with his pit crew. They give him the bad news that his average speed over the lap was 235 mph. Better luck next time, Jim-Bob. Jilly-Lou Shmoopla's family record lives on.

In the most general terms, the derivative of a function is the slope of that function. Since most functions aren't straight lines, the definition of "slope" takes a little more work than it did before.

Once we know what derivatives are, we can do some interesting stuff including relating derivatives to the functions from which they came.

Non-Differentiable Functions
Sometimes, the easiest way to understand an idea is to understand what it isn't. For example, a purple elephant is not a rhinoceros. Bam. Understood. Check out this list of functions that are non-differentiable for different reasons.

Definition of the Derivative
This YouTube video gives you a simple, brief explanation of the derivative of a function. You can learn what a derivative is in the time it takes you to pop a bag of popcorn, unless you're like us and ruin three of them before you figure out the "popcorn" button on your microwave.

I Will Derive!
“At first I was afraid…I was petrified.” If you’re feeling a little scared from this whole derivative thing, take a break to laugh along with this video.

The Calculus Controversy
You thought fighting with your sister over the extra roll at the dinner table was bad enough; Newton and Leibniz fought over the invention of calculus. Here’s a video that clarifies this controversy.

Derivative Calculator (Differentiator)
Now that we’ve spent an entire chapter showing you how to find derivatives the hard way, here’s a simple calculator to check your work. Just don’t tell your teacher we showed you this link.

First Derivatives of a Function:
This link shows you how a difference quotient becomes a derivative. It comes complete with an interactive applet you can play with to occupy yourself for hours. Hours, we say!

The Mean Value Theorem:
This link explains and helps you visualize the mean value theorem. With this, the theorem will look less like an angry tiger and more like a cute kitten. Or, you know, a cat that barks like a dog.