At every moment, an animal's body is a beautifully choreographed performance of cells working together. Think of it like it like a theater production with trillions of cast members all on the stage at the same time. In order to maintain organization, all of the cells have standard biological conditions under which they can function. There are baseline levels for salt concentration, pH, nutrients, fluids, and body temperature.

The process of regulating and maintaining the internal environment is called homeostasis. All forms of homeostasis involve three stages: sensing, processing, and responding. The sensing stage is completed by thousands of internal receptors that detect the levels of a variety of things in the body. These sensors then report the information to the brain, which computes the information. Then the brain will orchestrate a response to make things homeostatic. Thanks, Brain!

Think of it like a thermometer, a thermostat, and a furnace. The thermometer measures the temperature (sensing), the thermostat decides it's too cold in the house (processing) and sends the signal to the furnace, and the furnace fires up to make it nice and cozy warm (responding).

The reason that solutes, pH, and temperature need to be at such specific levels is because of enzymes. Enzymes are the keys that catalyze chemical reactions in the cells and allow them to take place. As shown in the graphs below, enzyme activity levels can vary greatly depending on temperature and pH levels. If the proper levels of everything aren't maintained in the cell, the consequences can be deadly. For example, an imbalance of potassium and sodium can cause the heart muscle to fail.

The graph on the left shows the % of activity (vertical y-axis) that an enzyme has over a range of temperatures (horizontal x-axis). Notice that the enzyme only reaches near 100% activity at one temperature. The graph on the right shows the % activity (y-axis) for three different enzymes (blue, yellow, and green) over a range of pHs (x-axis). Notice that each enzyme works best at only a single pH.

The environment both inside and outside of our bodies is constantly changing, and as conditions change, the body must respond to maintain homeostasis. The thing it's responding to is called the stimulus. In the diagram below, we see the circle of homeostasis. If the body detects a stimulus (the teeter totter at the bottom), a receptor (or sensor) will detect the imbalance and send a signal to the brain (or the control center). The brain sends out a signal that causes a response. Then the appropriate gland, called the effector, sends a response (in the form of a hormone) that tells the cells to bring things back into balance. 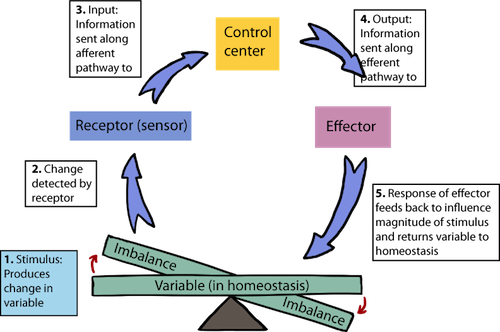 The circle of homeostasis. 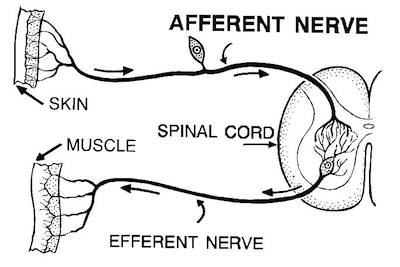 Diagram of the afferent and efferent nerves which lead towards and away from the central nervous system. Image from here.

Most processes involved in homeostasis are regulated by feedback mechanisms. In the body, we have positive and negative feedback, but the terms are a bit backward to what you'd think. When we're talking about homeostasis, we usually want negative feedback. Let's explain.

Negative feedback mechanisms are where the body has determined that something is happening that needs to stop or decrease, and so the endocrine system does something to bring it back in check. Imagine you're riding your bike down a hill. The wind's in your hair, your face is to the sky, and you can't wipe that cheesy grin off your face.

In negative feedback, the body sees the ocean and says, "No way am I going in there." Action is taken to bring the body back to homeostasis. If we think about how the pancreas works after a meal, the influx of sugar is like us powering down the hill. Our blood sugar levels are now out of homeostasis and a hormone is released to put on the brakes.

The stimulus of having high blood sugar is detected by the sensor and sent to the brain. The brain sends a message to the effector (the pancreas, in this case), which then releases insulin into the blood. Insulin binds to receptors on the cells and tells them to start absorbing glucose from the blood. Once that's done, the stimulus is gone, insulin stops being released, and everything is sunshine and roses once more.

See, negative feedback is our friend. Positive feedback is also our friend, though he doesn't come around as often. In a positive feedback mechanism, something is happening and the body decides that we need more of that. Back to our bike on a hill example: you and your bike are speeding down the hill and you see the pier and the ocean. You decide that this sensation is too amazing, and so you start peddling furiously, because you're sure you'll sail right off the pier and straight on till morning.

We don't want positive feedback just any old time. Think of our pancreas making insulin. If we have a spike in blood sugar and our bodies release insulin to bring it back in check, we eventually want that response to stop. We don't want to go from high blood sugar to low blood sugar, and then right off the pier to zero blood sugar.

Positive feedback loops control things like oxytocin production, a hormone that stimulates contractions during childbirth. A pregnant woman in labor will receive more and more oxytocin, causing stronger and more frequent contractions, until the baby is born. Another example is blood clotting. The body wants to speed up that process, and positive feedback mechanisms insure that platelets just keep piling up until a clot is formed.

Gas exchange is another type of homeostasis. Sensors located in the walls of major arteries are constantly sending reports to the brain about CO2 levels and blood pH. High carbon dioxide in the blood will throw off the pH balance. High CO2 means low pH, because CO2 gets converted to carbonic acid. If the receptor detects a stimulus that carbon dioxide levels are too high and pH levels are too low, the brain gets notified so that it can send out the proper signals to increase respiration and circulation to bring in more oxygen.

Solutes are important for chemical reactions to occur, but only in the proper concentrations. Too much or too little of something can cause severe consequences. Iron deficiency, copper deficiency, and iodine deficiency are just a few examples that can cause serious problems in your body. Apart from specifics, overall ion levels control the pH inside the body, which is important for all biological processes.

Luckily, the blood is filtered by the kidneys. The kidneys remove excess solutes from the blood so that they can be excreted as urine.

Organisms are made up of mostly water, so it's no wonder regulating water is so important. Homeostasis of water is called osmoregulation. This is the control of the levels of water in the body, and since all solutes are dissolved in water, it controls solute concentrations, too. 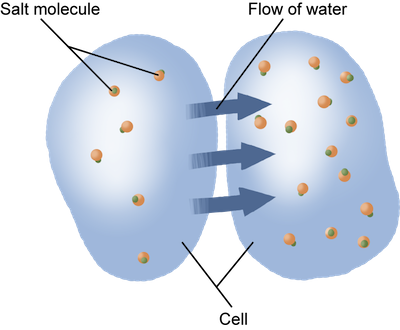 Before we talk about osmoregulation, we first have to understand the movement of water. Water moves based on the concentration of solutes and this process is called osmosis. The endgame in osmosis is equalizing the concentrations of solutes by changing the amount of water in each location.

Osmosis is super important to homeostasis. Cytosol is mostly water, and blood is mostly water, and both have some amount of solute dissolved in them. If the cytosol and the blood have different concentrations of solute, water will move one direction or the other. Cells and blood vessels only have so much room for water. If too much water moves in, the cell can fill so full that it bursts. Pop goes the red blood cell. 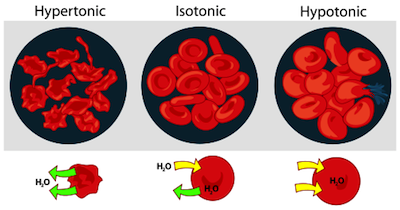 Diagram of what happens to red blood cells in three different environments due to osmosis. Image from here.

Osmoregulation is even more complicated for animals that live in the water. They have to worry about osmosis occurring between their environment and the insides of their bodies. There are two ways that water dwelling animals can handle this: osmoconformation and osmoregulation.

Jellyfish and sea anemones are osmoconformers. They are unable to regulate the water levels inside of their bodies and are at the mercy of osmosis all the time. (Let's face it, these guys are the mercy of everything all the time.) They don't have to worry as much about their cells swelling to bursting. They have elastic bodies that can handle the changes in size, like a balloon (though like balloons, these guys have their limits). Osmoconformers also tend to live in environments that are relatively stable.

Most animals, though, are osmoregulators. They need to keep their solute concentrations in check. Think about it. What would happen to a fish if the inside of its body had a higher salt concentration than the surrounding water? Where would the water move? Water would move into the cells, and lots of it. That influx of water would spell death to our fishy friend. 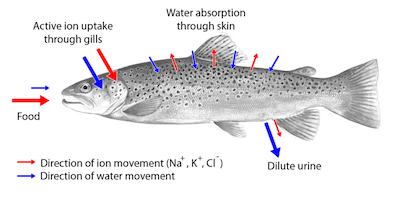 Diagram showing the movement of water and solutes (ions) in freshwater fish. Image from here.

Freshwater fish are naturally hypertonic, which means that they have a higher solute concentration than their surrounding water. This causes two things:

Both processes will increase the water level in the fish and reduce the salt level. Yet, the fish doesn't blow up like a balloon. To keep their cells from bursting, fish pee a lot. They have highly diluted urine that removes the excess water. That's how they deal with the influx of water. But what about the efflux of ions? Fish have special ion pumps in their gills to soak up the ions they need from the water so that they can maintain homeostasis.

Fish that live in the oceans have the opposite problem. These guys are naturally hypotonic, meaning that they have lower concentrations of solutes in their bodies than the surrounding salt water. They osmoregulate by producing really concentrated urine (and they probably don't pee as often). This allows them to reduce their internal salt concentration without losing too much water. They also actively transport ions out of their gills.

Homeostasis can fail at any stage of the process. A problem with the sensor, the brain, or the communication pathway can wreak havoc on the entire body's homeostasis. Sometimes, the sensors and the brain work fine, but the body isn't capable of completing the response. Diabetes mellitus is an example of this type of homeostatic failure.

Blood glucose levels are controlled by sensors in the blood vessels. When the glucose levels rise, it signals the pancreas to produce insulin. However, if a person has Type I diabetes, they aren't able to produce insulin. If they have Type II diabetes, then the cells of the body don't respond to the insulin. In both types, the body isn't capable of completing the task that the brain is telling it to do, and it can't remove the excess glucose from the blood.

Excess glucose in the blood is one example of a breakdown in maintaining homeostasis. If one part of the body's highly choreographed dance is disrupted, multiple other systems can be affected. This is why diabetes causes symptoms throughout the body, as diagrammed in the picture below. 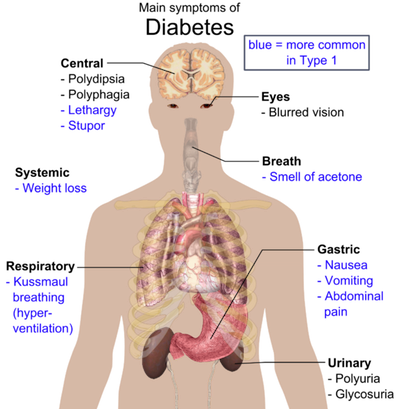 Diagram of the main symptoms of diabetes, showing the wide-spread effects that failure of homeostasis can have. Image from here.

Did you know that salmon are capable of swimming in salt-water and fresh-water? As they as they travel to spawn each year they have to navigate many types of waterways, and it is beneficial for them to be able to osmoregulate in either situation since they might have to swim in salt-water or freshwater.