At the species level, scientists first try to estimate how many individuals there are. Since animals and plants don't mail their census forms in, scientists have to go out and count them. Usually biologists estimate population size, and they can do so a couple different ways.

Mark-recapture is a method used for animal populations. Biologists catch a bunch of the animal they are researching—let's say chipmunks. They mark the chipmunks in a non-lethal way, such as clipping a little fur off the chipmunks' backs. Then they release the chipmunks back into the wild. A little while later, the scientists go out and catch chipmunks again. They count the number of chipmunks they caught that had markings, meaning they re-captured these same chipmunks. They also count the number of chipmunks they did not catch the first time (the ones without fur clipped off) and compare the two numbers. From the percentage of chipmunks they recaptured, they can estimate how many more chipmunks are out there. If most of the original chipmunks are caught again, that means they probably marked a large percentage of the population the first time. If the second time they caught 100 chipmunks and only 1 was marked, that means there are lots of other chipmunks out there and the population size is pretty big.

Other ways biologists can estimate population sizes are by counting all the individuals in an area of known size, then scaling up to figure out how many there are in the entire area the population covers. If you wanted to know how many maple trees are in a 100-acre forest, you could count the number of maple trees in 1 acre and then multiple by 100. In this case you would be assuming that all the acres in the forest have about the same number of maple trees, which might not be true if a pond is covering a few acres.

Why do we care how many individuals are in a population, anyway? If there are not very many individuals, that could be bad. Small populations have issues. These are not issues that any amount of psychotherapy can help. Small populations are more at-risk of extinction due to random fluctuations in the environment, or in the population itself. If one year all the surviving offspring are males, for example, the population would have a lot of trouble reproducing after that. Unless, like clownfish, individuals can change sex… but most species can't do that. This is an example of demographic uncertainty, which means that population-level characteristics such as sex ratio, reproduction rates, and survival rates can vary widely. These things affect how well a population can carry on for future generations. Small populations are vulnerable for a variety of reasons, including:

We already talked about demographic uncertainty, but another important factor is genetic drift, which is a random change in gene frequencies over time. Say yellow warblers (a type of bird) in a particular population can be born with one of two singing voices: Taylor Swift or Justin Bieber. Over a few generations, all the young warblers with Taylor Swift voices die out, leaving only Justin Bieber-birds. Oh baby, baby, baby, we hope not. The problem is that genetic drift means a loss of genetic diversity, which might make the birds in that population less able to deal with cold winters, food shortages, predators, and whatever else comes their way.

Even without genetic drift, a small population is vulnerable to environmental fluctuations. If there is a drought, or a really cold winter, the entire population could be wiped out. If a species is only made up of a few populations, that species is sliding closer and closer to extinction.

If you have ever played tug-o-war, you know that sometimes you just need more people. Sometimes small populations just need more chipmunks. Or cardinals, or sunflowers or whosits, or whatsits. A population might need more than a certain number of individuals to function. Prairie dogs, for example, have a complex system of keeping watch and calling the alarm when predators are nearby; if there are not enough individuals to keep watch, the population will quickly become dinner for someone else. This is called an Allee effect.

We know that small populations have problems, which puts the entire species at risk if there are only a few populations left. What is a conservation biologist to do?

If you were going to maximize the number of individuals in a population, you would need to increase birth rate and immigration and decrease death rate and emigration. Got it? Good.

Birth rate: This one can be tough. It's hard to make animals have sex when they don't want to. You can lead a horse through water, but…Just ask a giant panda, who are notoriously bad at having babies. Breeders gave pandas at a zoo porn to get them in the mood. Read about it here (and no, this link won't harm your reputation or your computer). Sometimes though, increasing birth rate is easier. If you build it, they will come…nesting spots are hot commodities for birds. The Kirtland's warbler, a bird native to Michigan, only nests in young pine trees. Historically, periodic fires burned patches of forest and created space for young pine trees to grow. In the area where the Kirtland's warbler lives, a lack of fires left an old forest with very few young trees and not enough nesting sites. The Kirtland's warbler was in danger of going extinct, as only 201 breeding pairs were left in 1971. Then, scientists started burning the forest, letting young pine trees grow and creating nesting sites for the warblers. Warblers have since increased their population numbers and spread out to Wisconsin, Canada, and more parts of Michigan. 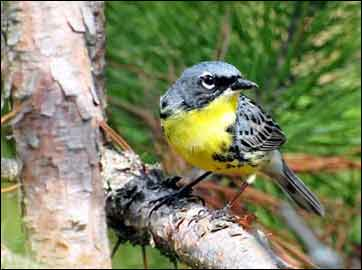 The Kirtland's warbler in a jack pine tree. Image from here.

Immigration: Increasing the immigration rate is a good tactic to save a small population or recolonize an area. Obviously, this does not create more individuals like increasing birth rate does; it just moves them around. After multiple oil spills off the California coast in the 1980s, colonies of common murres, a seabird, decreased in number big time. Whole colonies were wiped out and, despite their name, common murres were not so common any more. Enter the conservation biologists. Common murres breed in colonies with lots of other birds, so scientists had to trick the murres into thinking they had company. Seriously, we are not making this up. Scientists played bird calls and put fake birds ("decoys") and mirrors up to make the birds feel welcome. Talk about hospitality. Luckily for the murres, they were bird brained enough that the tricks worked. A rock with no birds on it grew to a colony of more than 600 over 10 years. The increased immigration rate resulted in an increased birth rate and voilà, recovery. 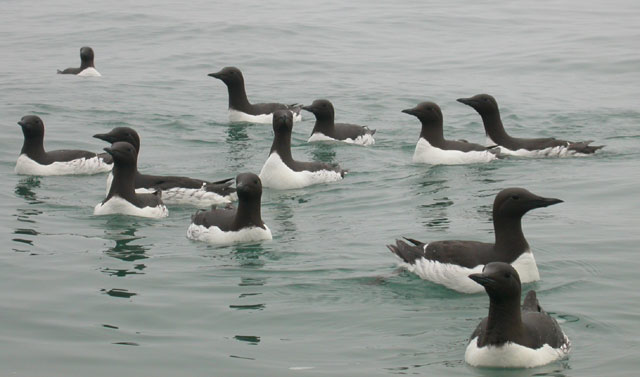 Death rate: All living things eventually die. We're sorry, but it's true. If conservation biologists can decrease death rate so that more individuals in a population have babies, then the population will grow. Death rates can be reduced by protecting species from hunters and collectors, but also by increasing the amount of habitat available to them. Usually a decreased death rate is a combination of conservation efforts that target a species.

Emigration rate: When individuals leave a population, they do not always get up and walk away. Plant seeds are dispersed a variety of ways, including by wind, water, and animals. If a plant population has a low growth rate, sometimes conservation biologists collect seeds from the plants before they can disperse away. They plant these seeds in the population, effectively decreasing the emigration rate.