Habitat loss is one of the biggest threats to biodiversity—it is the number one reason species go extinct. Clearcutting forests to create fields, filling in wetlands to build houses, and creating dams that change river flow are all examples of habitat destruction. Mediterranean ecosystems and temperate forests have already lost 80% of their original cover. The rapidly growing human population is putting more and more pressure on existing habitats.

In most developed countries, original forest cover was lost and converted to farmland long ago. This has ecological consequences and many countries now have national parks and other ways of preserving land for future use. Now, much of the world's biodiversity is found in tropical forests. Unfortunately, tropical forests are being cut down at the rate of 50 football fields a minute. Yikes! Why would we need to make so many football fields?

It used to be (before the 1980s) that quickly growing human populations in tropical countries were the main drivers behind forest loss. Individuals and families would clear plots of land for cattle, houses or small farms. Nowadays, large commercial agriculture is behind most of the forest clearing—crops, trees and livestock for the global market usually replace tropical forests. 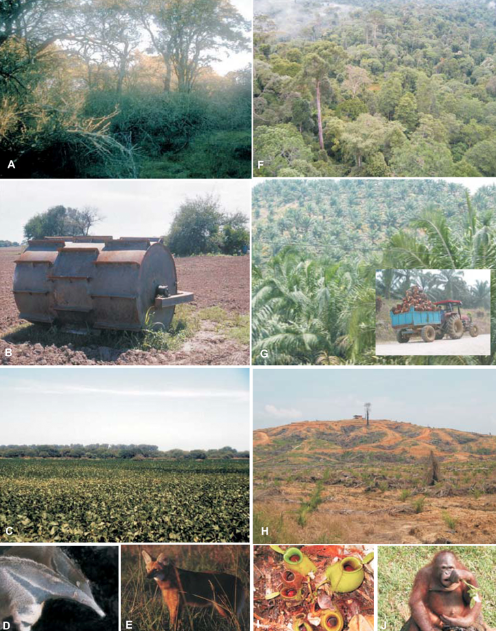 Many tropical forests are being rapidly cleared for agriculture. In the left column, the Chaco thorn forest (A) in Argentina and Bolivia is converted to soybean fields (B and C); the giant anteater (D) and maned wolf (E) that live in that forest are threatened by habitat loss. On the right, species-rich forests in Borneo (F) are cleared for oil palm plantations (G and H). Bornean pitcher plants (I) and orangutans (J) are heading toward extinction. Image from here.

Tropical forests are not the only ecosystems undergoing habitat loss. Temperate forests, wetlands and coral reefs (the "rainforests of the sea") are all only a portion of what they used to be. Mountain habitats, grasslands, marine and aquatic habitats are being destroyed for human energy, agriculture and fishing needs.

An issue related to habitat loss is habitat fragmentation, where a habitat that was once continuous is split up into smaller pieces. This has big impacts on animals that can't move between patches of suitable habitat—all of a sudden, their home becomes an island in a sea of roads, construction sites and ranches. Fragmented habitat makes it harder to find food, and harder to find a mate because individuals and populations become isolated from each other. This leads to decreased survival and reproduction of the species in fragmented habitats. Breaking a habitat into fragments also increases the amount of edge in the remaining habitat. Edges are usually less desirable habitat, as they provide less shelter and are more likely to be degraded by the disturbance that fragmented the habitat in the first place. 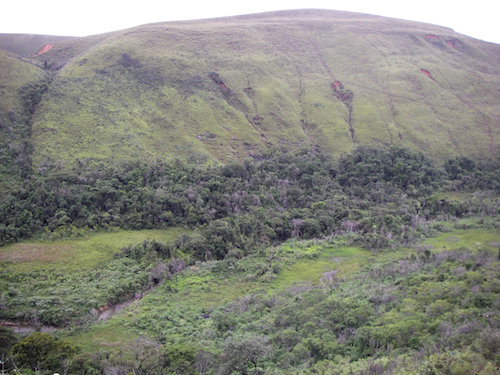 Fragmented forest in Madagascar, home to many endemic species. Image from here.

There are a few ways of doing conservation in fragmented habitats: