Overexploitation means harvesting species from the wild at rates faster than natural populations can recover. Overfishing and overhunting are both types of overexploitation. Currently, about a third of the world's endangered vertebrates are threatened by overexploitation.

Two birds that were victims of overhunting are passenger pigeons and great auks (a type of bird). Both were hunted to extinction. American bison came close to extinction when they were hunted for their skins in the 19th century but have recovered, so luckily it's still okay to eat bison burgers (sorry, vegetarians!). Overhunting still poses a big threat to animals in developing regions, particularly primates in Africa. 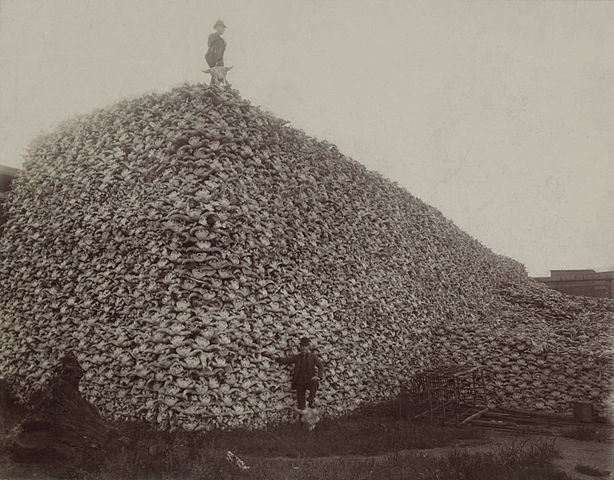 A big ol' pile of bison skulls in the 1870s. The skulls were ground into fertilizer.

Most of the land animals we eat are farm-raised, not hunted in the wild. Fish, on the other hand, are often still fished from the wild. Humans have to eat, but we have been taking fish for food faster than they can replenish their wild populations. It is estimated that 63% of commercial fisheries are overfished to some extent.

Overfishing happens mostly because humans have gotten really good at fishing. We have big boats, fancy GPS systems, and mechanized fishing lines. The fishing techniques called bottom trawling and dredging involve dragging huge heavy nets across the ocean floor, picking up everything along the way. This includes plants and animals that are not the target fish. These unwanted things usually get tossed out. All this other, non-target catch is called bycatch. Bycatch can include sea turtles, sharks, corals, and lots of other animals. These fishing methods are super destructive of habitats on the bottom of the ocean, especially slow-growing corals, in both warm and cold water.

The tuna, cod, halibut and haddock fisheries in the North Atlantic Ocean have declined to one-third of what they used to be. The overexploitation of fisheries is an example of a tragedy of the commons—people take more and more of a common resource until it is no longer available.

What about farm-raised fish? Is aquaculture the answer? Maybe. Aquaculture is on the rise for both freshwater and saltwater organisms. Sometimes aquaculture is bad for ecosystems and results in fish that are not as nutritious as wild-caught fish. Abalone, catfish, clams, and mussels that are farmed are both sustainably raised and nutritious.

Farm-raised shrimp are another story. Shrimp farms are usually located in the intertidal zone of tropical areas, right where mangrove forests live. Mangrove habitats provide many ecosystem services, such as nurseries for fish, protecting land from storm surges, protecting coral reefs and seagrass beds from sedimentation, and carbon storage, to name a few. However, mangroves are one of the most threatened ecosystems in the world, and many of them have been clear-cut for shrimp farms, coastal development, and agriculture.

Sometimes organisms are harvested for purposes other than food. Many animals and plants are collected to be pets, souvenirs, or trophies in a collection of exotic species. Many of these collecting efforts are illegal and are also known as poaching, which is the illegal capture of protected organisms.

Poachers collect rhinoceros horns, parrots, orchids, and many other living things illegally from tropical forests, and also collect fish or corals from marine ecosystems. The problem is that collecting these animals is bad for their populations and habitats, especially when it is a species that forms a habitat, like coral reefs. Not to mention what it does to the organism itself—many animals die while they are being smuggled for the pet trade, and corals are killed off to make trinkets for souvenir shops.

Corals are being overharvested, adding to their existing threat of extinction from climate change. Read about catching coral smugglers here.