You might have heard about the hole in the ozone layer. To understand what it is and why it is important, we'll first look at what ozone does in our atmosphere. The atmosphere is divided into two layers—the lower layer is the troposphere, and the stratosphere is the upper atmosphere. Most ozone is occurs naturally in the stratosphere and acts as a protective shield, keeping out harmful UV rays from the sun. We'll call this the "good" ozone.

Some ozone is also located closer to the ground. This ozone causes smog and is destructive when it comes into contact with living things. We'll call this "bad" ozone (or some might call it "misunderstood" ozone). The US Environmental Protection Agency uses the phrase, "good up high, bad nearby" to describe ozone's split personality. Kind of a nice rhyme, if you ask us. Kudos to the US EPA.

Pollution from human activities has caused ozone to be destroyed (or "depleted") in the stratosphere, leading to the "hole" in the ozone layer. Technically, it's not exactly a hole but a depletion of ozone around the north and south poles.

Chemicals used in air conditioners, pesticides, aerosol propellants, such as chlorofluorocarbons (CFCs) and other ozone-depleting chemicals called halocarbons are responsible for destroying ozone in the upper atmosphere. When ozone in the protective layer has been destroyed, it lets more UV-B reach the ground. These harmful rays cause sunburns and skin cancer in people, damage crops, and harm marine algae. The good news is that the main ozone-depleting chemicals are being phased out and are not allowed when an alternative chemical can be used instead.

Depletion of ozone is actually a reversible event—as long as we stop using chemicals that destroy ozone, our stratosphere should return to normal eventually. The EPA estimates ozone levels will return to normal by 2050. 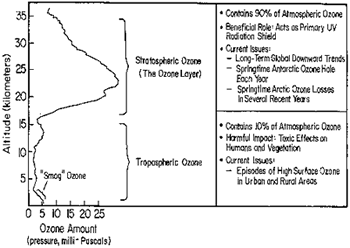 Acid rain: Another unintended consequence of pollution is acid rain. Acid rain is rain that contains nitric and sulfuric acid, and is usually caused by pollution from power plants that burn fossil fuels. Power plants release sulfur dioxide and oxidized nitrogen, which form acids in the atmosphere.

As you might imagine, acid falling from the sky is not great for the things it lands on—rivers, lakes, trees, even buildings and cars. The sulfuric and nitric acids released at power plants can travel hundreds, even thousands of miles by wind.

Acid rain hits lakes and streams hard. The organisms that live in lakes and streams (fish, amphibians, plants, clams, snails, insects) have a hard time surviving in acidic conditions. To be fair, you would not be happy if acid rained down on you from the sky, either. Fish eggs cannot hatch if pH is too low (≤ 5), adult fish die, and clams, snails, and insects die even at higher pHs, leaving fewer food options for predators. Acid rain also hurts trees by damaging their leaves, slowing their growth, and making soil more toxic to plants.

The good news is that the US passed laws to reduce air pollution in 1990 with the Clean Air Act Amendments. Since then, the effects of acid rain on aquatic and forest ecosystems have decreased (Talhelm et al. 2012).

Climate change: Climate change, aka global warming, is causing huge changes to biodiversity, and it will continue to threaten species and their habitats for the foreseeable future.

The Earth's climate changes slowly over time, as we know from the fact that there have been ice ages in the past, and warmer periods (like now). These natural changes occur over tens of thousands of years. The problem now is with anthropogenic climate change—that is, climate change caused by human activity, which is making the climate change a lot faster than it normally would. How did we do that? Burning fossil fuels.

Since the industrial revolution in the 1850s, our society has been burning fossil fuels (coal, oil, and natural gas) like crazy. Fossil fuels are full of carbon because they are made of plants and other organic matter that was crushed under intense pressure over millions of years. 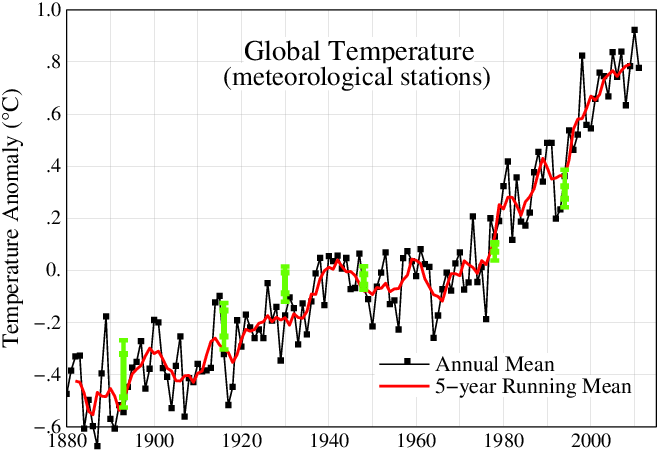 Earth's temperatures are rising, as this graph from NASA's Goddard Institute for Space Studies shows. The lines show difference from the average temperature between 1951-1980. Image from here.

The greenhouse effect has a bit of a lag time. This means that we are now feeling the effects of greenhouse gases emitted decades ago. Even if we stopped burning all fossil fuels right this minute, the Earth would continue to warm for at least 50 years.

Climate change affects physical processes on the Earth. Glaciers are melting at increasingly fast rates, and lakes freeze over later in the season and thaw earlier. In dry areas such as the American West, Argentina and Australia, longer drought periods result in intense wildfires. These and other physical changes affect biodiversity.

The melting of Arctic ice caps and glaciers causes sea level to rise, since more water is in the ocean. Rising sea level threatens both humans and other things that live in coastal areas, since low-lying coastal areas will be flooded as sea level rises. Miami, New York and even whole countries like Bangladesh and the Philippines are facing the possibility of being flooded.

The ocean actually absorbs a good chunk of the carbon dioxide emitted each year, but as it does, ocean water becomes more acidic. Increased temperatures and lower pH in the ocean are causing problems for marine life. Corals reefs are experiencing coral bleaching, which does not involve dying their hair. Coral are dependent on little photosynthetic microorganisms called zooxanthellae. The zooxanthellae capture sunlight and turn it into food for the coral (which is an animal, btw) and the coral gives the zooxanthellae a place to live.

The problem is that zooxanthellae are sensitive to high temperatures and polluted water. When the zooxanthellae die, the coral is left alone and colorless, without its food-providing partner. This is called coral bleaching. Sometimes corals recover from bleaching, but other times algae move in and cover the coral reef (see part B in the figure below). Coral used to be abundant in Jamaica, but now has pretty much disappeared from there.

A healthy coral reef (A), an algae-dominated reef (B), bleached and non-bleached corals (C), and a partially-bleached coral (D). Image from here.

How else does climate change affect biodiversity? Animals and plants that live on mountaintops and are adapted to cold temperatures may soon find themselves out of habitat. As temperatures warm, species that currently live in more extreme climates will have to adapt or die out.

Species are shifting their ranges because of climate change. Things that usually happen in the spring occur earlier than they used to, including plants flowering, leaves opening up on trees, and birds laying eggs. Birds have also delayed their migrations.