Who likes to move it, move it?

While most of us larger, multicellular (or tons o' cells) eukaryotes can move and groove with the help of some legs and arms, our single cells and unicellular compadres aren't so lucky. What some cells lack in the ability to give a high-five, can be made up with the ability to get around with cellular appendages. 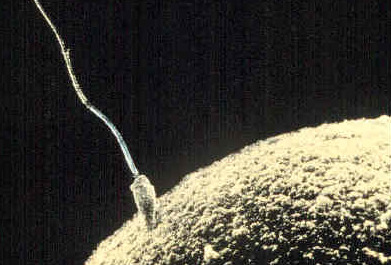 A sperm cell, shown fertilizing an egg above, is an example of a eukaryotic cell that uses a flagellum to do the locomotion.

Prokaryotic flagella are made of specialized proteins. Eukaryotic flagella are composed of microtubules surrounded by a plasma membrane. Microtubules are just one component of the eukaryotic cell cytoskeleton, which functions to do things like organize and support cell structures just like your own boney skeleton supports you. Microtubules are made up of alpha and beta tubulin proteins dimers (pairs), which link together to form long chains. Thirteen long chains are then rolled up into a hollow tube like a rudimentary pirate's scope. Ahoy, matey! Where's me treasure?

In flagella, these microtubules are in a special "9 plus 2" arrangement. That means, if you were to slice one of these suckers in half, you'd see 9 pairs of microtubules arranged in a circle with two more in the center (see picture below).

Cilia (singular: cilium) are another type of cellular extension with the same 9 plus 2 arrangement as eukaryotic flagella. Cilia, however, are shorter and there are more of them. They resemble a well-coifed hairdo on the surface of some cells, flowing in the wind. What they actually do, however, is rhythmically beat back and forth, moving liquid around them. Cilia line the cells of your respiratory track, for example. While cilia don't actually help these lung cells themselves move, they help move the mucous around them. You can watch some cilia move here. 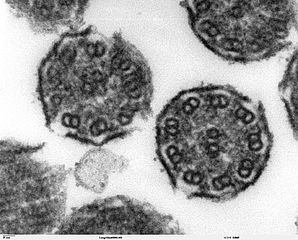 Shown here are cross-sections of cilia showing the classic "9 plus 2" arrangement of microtubules that both cilia and flagella share.

Perhaps the coolest of the eukaryotic locomotive devices are pseudopodia (singular: pseudopodium), or these globular extensions of cell membranes. The word pseudopodia translates to "fake feet" in Greek. Unicellular eukaryotes such as protists (we'll get to the details on these guys later) are one type of organism that move using these temporary limbs.

Pseudopodia aren't exactly separate appendages, nor are they permanent structures like flagella and cilia. Instead, pseudopodia are actually a part of the cell that reaches out from the cell membrane like a pair of slimy hands from a swamp. They are structured using parts of the cytoskeletons, such as microtubules, but not using the same 9 plus 2 arrangement. 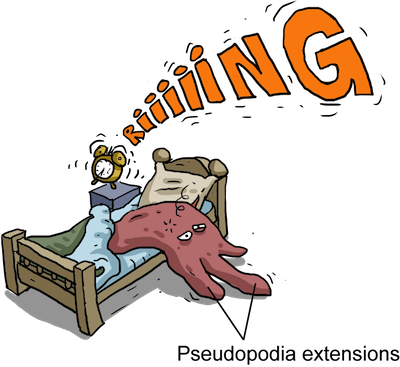 While protists use these fake footsies for locomotion, our white blood cells use pseudopodia to engulf foreign bacteria that have the audacity to invade our bodies. (The nerve!) Essentially, they use their pseudopodia to reach out and swallow 'em whole in a process known as phagocytosis.

Join an amoeba for lunch. Mmmmmm. We'll have what he's having.