As mentioned earlier, bryophytes are a group of plants that are non-vascular and don't have seeds. If they don't have seeds, how do new plants grow? Instead of seeds, bryophytes have spores. Spores are single cells that produce all the genetic information and capability to grow into a new plant. But bryophyte reproduction doesn't stop at spores; bryophytes, and all other plants that we will see soon, go through a life cycle called alternation of generations. Alternation of generations is a life cycle that produces two types of plants:
gametophytes and sporophytes. Gametophytes produce gametes (sperm or eggs) and sporophytes produce spores. These two plant types make up the plant circle of life. We are still waiting on Elton John to finish the score to Shmoop's "The Plant King" musical.

There are four main stages in a plant's reproductive cycle. Starting with a gametophyte, the stages are

1. Gametophyte produces gametes, which are single-celled reproductive units. Gametes are haploid(n), which means they only contain one copy of each chromosome.
2. Sperm and egg find each other and fuse to form a zygote. This zygote is diploid(2n), meaning it contains two copies of each chromosome (one from the sperm, one from the egg).
3. The zygote grows into a plant. This plant is called a sporophyte(2n), because it produces spores.
4. The sporophyte releases spores and they grow into haploid gametophytes.
5. Rinse and repeat.

A moss sporophyte looks like a jellybean on a stick emerging from the top of a bed of astroturf: 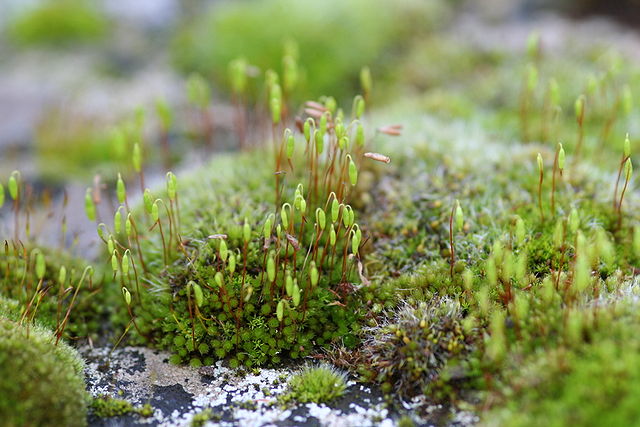 When the sporophyte is mature, it releases spores out of the capsule, which is the hollow jellybean-like structure on the end of the plant.
A key feature to remember about bryophytes is that the sporophyte grows on top of, and is therefore dependent on, the gametophyte. This will come back later, we promise.

Bryophytes are small plants that generally live very close to the ground (you might want to take a magnifying glass if you go out looking for them). Why haven't they developed into stately trees? Two reasons:

1. No support system to fight gravity. If bryophytes started growing tall, gravity would cause them to topple over, and then an oblivious cow would probably stomp them on.
2. No vascular system. Bryophytes can distribute water and nutrients through their bodies because they have thin organs that things can pass through. However, they would need a plumbing system to get water and nutrients up a taller stem.

Bryophytes don't have root systems. Instead, they anchor themselves to the ground with rhizoids, which are threadlike stretches of cells (in mosses) or long cells shaped like tubes (in liverworts and hornworts).

One thing bryophytes do have that helped early land plants survive is a cuticle. Cuticles are waxy layers of cells. These cells protect the plant from drying out, which is important when they live in air instead of water. Cuticles can also help keep pathogens on the outside of the plant body. Wouldn't want our plants getting bird flu, now would we?

One of the best-known bryophytes is sphagnum moss. Try saying that three times fast. Sphagnum is a genus of moss that contains over 100 species. It is also called peat moss because it lives in peat bogs and contributes to layers of dead plant material. This material is harvested and used for fuel, and also as a soil moisturizer.