The word "organic" gets tossed around pretty freely these days. Some people might think organic means "no pesticides" or "really expensive produce." In chemistry, organic refers to matter containing carbon atoms—and that's a lot of matter. 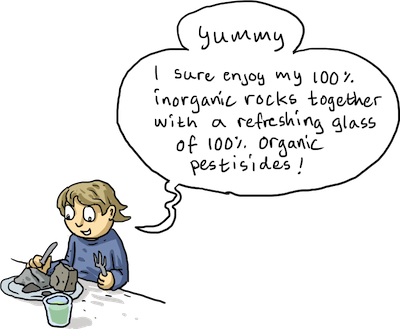 Carbon is an extremely versatile atom, capable of forming single, double, and even triple bonds. This kind of flexibility allows for carbon to form chains, branched chains, and rings when connected to other carbon atoms…kind of like a super LEGO kit. The bonds don't stop there. Carbon is hardly exclusive in its bonding and likes to play the field. It forms compounds with hydrogen, oxygen, nitrogen, and dozens of other elements. Additionally, carbon can bond with metals, including alkali, alkaline earth, transition, and post-transition metals. The possibilities of carbon bonding are almost endless. This leads to the question, "What makes carbon so special?" Read on to find out.

Can Bacteria Produce Hydrocarbons?
Is the energy crisis solved?

Does Methane Indicate Life on Mars?
Basic organic chemistry knowledge as part of the quest to find ET.

Get an Organic Job
A resource for careers in organic chemistry

It Finally Happened
Here's a rap about organic chemistry.

The Proof is in the Pudding
A silent film showing how bromide will react with alkenes and not alkanes.

Chiral Carbons
Set to dramatic music, this will keep you on the edge of your seat.