Sam and Eric in Lord of the Flies 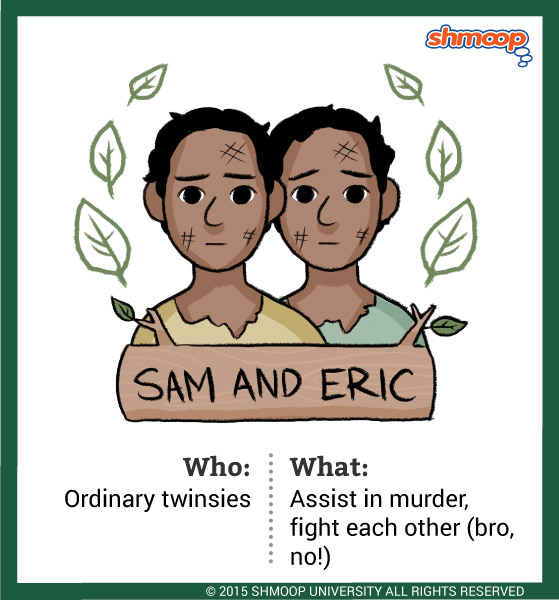 Piggy tries, but even he can't manage to keep Sam and Eric straight: "Which is Eric-? You? No—you're Sam—" (1). For most of the novel, the boys are simply "Samneric." (Is anyone surprised that Jack is the first one to use a nickname that takes away someone else's individuality?)

Like Piggy and Ralph, Sam and Eric try to hold out against savagery. Surrounded by Jack's gang, they protest "out of the heart of civilization. "Oh, I say!" "—Honestly!" (11.175). And, sure, they participate in the Simon-slaughter, but they try really hard to convince themselves that they didn't:

The twins were very surprised to see Ralph. They flushed and looked past him into the air.

"We just been in the forest—"

Sam touched a scratch on his forehead and then hurriedly took his hand away. Eric fingered his split lip.

Yeah, just keep telling yourself that, guys: the split lip and scratch are dead giveaways. The thing is, Samneric might be the closest thing to us. They're not leaders like Ralph; they're not brains, like Piggy; they're just ordinary people, who want to be good but aren't strong enough to resist being caught up in the evil.

When Ralph's group is holed up in Chapter 10, Sam and Eric start fighting. It's not clear what they're fighting about, but it's part of the general hopelessness.

"What's the good?," both of them ask. And then "from the darkness of the further end of the shelter came a dreadful moaning and they shattered the leaves in their fear. Sam and Eric, locked in an embrace, were fighting each other" (10.)

This is bad. If brother is turning against brother, then everyone's in real trouble. Piggy gets it. Right after they stop fighting, he whispers to Ralph, "We got to get out of this." If Samneric are fighting—and check out how Golding uses "Sam and Eric" instead of "Samneric," to show just how bad it is—then there's really no hope for the rest of them.

And if Samneric are stand-ins for us readers, then maybe Golding is telling us that war is a really, really bad sign: at its root, all human violence is brother against brother.