Lord of the Flies Primitivity 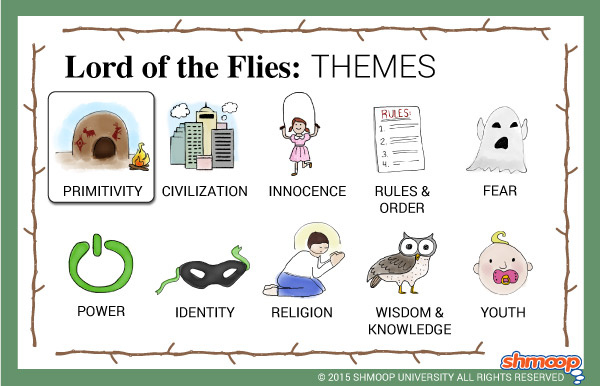 If well-brought-up British boys become violent savages when left without supervision, maybe people really are just violent savages, covered up in clothes and caps. Or maybe just some people are violent savages (*coughRogercough*). Either way, Lord of the Flies asks us whether that primitivism is inferior—or if it's our natural and rightful state, and if it's not a little more honest than the clean, "trim" British navy, pretending to be all noble while fighting its own gruesome battles. It sounds like there's a little bit of the beast in all of us.

Oh, and did you notice that "savage" is associated with coconuts and pig-killing—i.e., the life of a Pacific Islander? Golding is a man of his time, which means he's pretty casual about the racism that elevates Anglo "civilized" superiority. Sure, he questions whether Westerners are really all that civilized, but he doesn't question whether "savages" are really all that savage. Just something to keep in mind.

By having Ralph and Piggy help kill Simon, Golding suggests that we all have something primitive in us.