Lord of the Flies Rules and Order 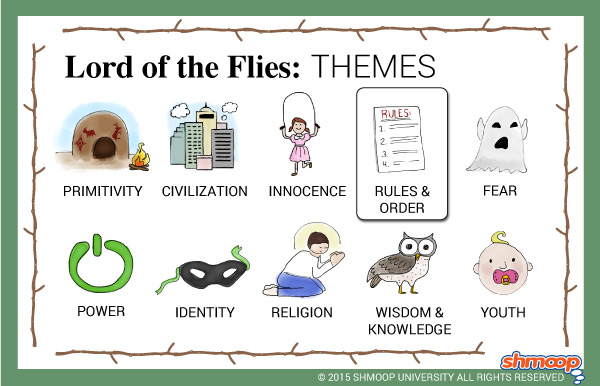 Be honest. If you woke up tomorrow and every adult on the planet had vanished, what would you do? (For the adults out there: what if you woke up and every police officer and credit rating bureau on the planet had vanished?) Would you dutifully get out of bed, brush your teeth, and head to school to try to organize the remaining kids into a democratic society? Or would you turn on the TV, break out the Hot Cheetos, and have a Halo marathon (assuming the power grid was still working)?

Yeah, we thought so. Cheetle isn't exactly war paint, but Golding's point holds: humans are basically corrupt and inherently evil. Rules and order keep people from their true, violent natures. Lord of the Flies tells us that, as soon as you put people outside of a system with punishments and consequences, they'll get busy destroying themselves. Rules may seem pointless, but they're the only things keeping us alive.

Questions About Rules and Order

In Lord of the Flies, rules and order are only as powerful as people agree they are.

Golding suggests that rules and order are the only thing keeping civilization from breaking down.